Minds + Machines Group Limited (LSE:MMX) > News from our portfolio of domains > Welcome to the garden, radio.garden! 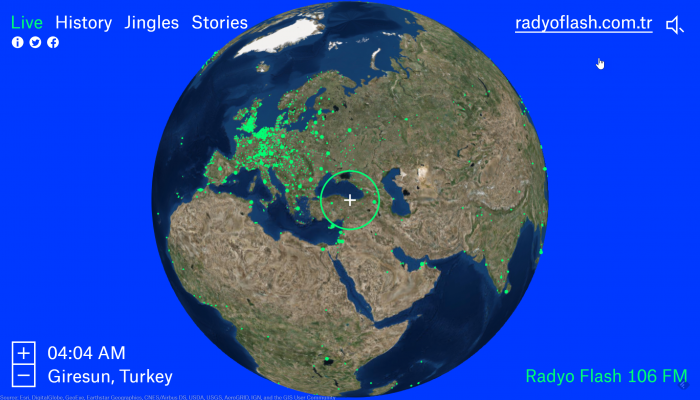 The MMX team was thrilled to learn of the internet's newest global radio tuner app, radio.garden, which launched in mid-December 2016. The team behind the amazing service -- a truly borderless world of broadcasting, available freely to anyone with an internet connection -- was obviously onto a very cool idea, because the world media pretty much flipped over radio.garden. We learned about the service, running on one of the MMX .garden domain names, when National Public Radio's Deepak Singh blogged about his discovery of the service on December 16. Within a couple of days, radio.garden was the darling of the news media, during a typically light news period that descends at the end of December each year. In his NPR.org blog post, Deepak wrote, "This week I stumbled upon a new website on the Internet called Radio Garden. Curious, I clicked on it and a globe started spinning before my eyes. It looked similar to Google Earth. Then I zoomed into the northeast part of the United States. And then a radio station started playing. On the bottom left side of the screen it said, Lewiston, United States. This is about 30 miles from Brunswick, Maine, where I now live. On the bottom right side, it said WRBC. The Bates College radio station was playing. "I planned to move the cursor halfway around the world to my homeland but first I dropped in on Tehran, Iran. My screen now said Radio Hamdam. I couldn't understand a word of the song, but the rhythm was upbeat, the kind of music you'd listen to while running on a treadmill. After two songs, I then wandered to Ghana. Highlife Radio Ghana, Kokrokoo FM 90.5 was on my screen. This seemed to be a talk show. Two guys were talking in a language unknown to me, but one of them was speaking in an animated voice, the other was laughing hysterically. They reminded me of Tom and Ray Magliozzi from Car Talk." Deepak shared with us his interview with radio.garden's founder, Jonathan Puckey of the Netherlands. Jonathan said, "The main idea is to help radio makers and listeners connect with distant cultures and re-connect with people from home and thousands of miles away," he told me. So far, some 8,000 stations have signed on." On behalf of the entire MMX team, we offer our admiring congratulations to the radio.garden team, and commend this fine .garden-based website to all music, talk and culture lovers the world over.
0 Shares
Next
Back to Latest News